There are twenty wooden and wax effigies on display in the Queen’s Diamond Jubilee Galleries in Westminster Abbey, plus the armour from the now lost funeral effigy of General George Monck. 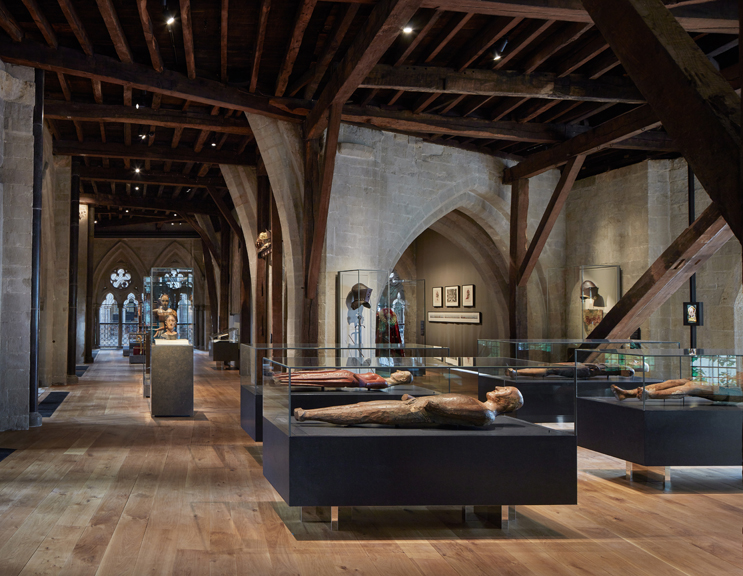 History of the effigies

From the late 13th century onwards funeral effigies of monarchs and other royal persons were carried in a funeral procession on the coffin beneath a canopy. The effigy was generally close to the physical dimensions of the person it represented and kings and queens were dressed in full coronation regalia. On arrival at the Abbey the coffin was removed from the funeral car and placed with the effigy within a candle-decked hearse at the foot of the steps leading to the High Altar. After the burial the effigy continued to be exhibited in the church and became the property of the Abbey authorities. Several of these effigies have disappeared over the centuries and of some only the wooden framework now remains. The medieval ones are carved in wood, with the features made from plaster or gesso. The later effigies have wax heads and hands with bodies of wood or soft materials.

The early wooden effigies were gathered together in the upper part of Abbot Islip’s chapel from 1606 and were displayed in the new Abbey Museum in 1908. Unfortunately, during a bombing raid in 1941, the water used to put out fires in the building above affected many of the effigies whose bodies were just made of straw or plaster, such as Henry VII and his queen. They were restored after the war by R.P. Howgrave Graham. Wax figures had been displayed in cases near to the burial place of the deceased but by the mid-19th century they too were in the Islip chapel. They joined the older effigies in the Museum after the Second World War.

This is the earliest effigy now in existence. He was buried in the Abbey in 1377 and the face is a death mask.

The face of Richard II's queen is also carved from a death mask.

The effigy of Henry V’s queen is a full length effigy with a painted red dress and groove on her head for a crown.

Only the pear wood head and arm of Elizabeth now survives.

The plaster head of Elizabeth of York's husband is a death mask.

Mary I’s wooden body and head were re-united for the new display but her face is not a good likeness.

The original effigy was remade in 1760 but during restoration in 1995 it was found that the original corset and drawers from 1603 still survived. The corset is now displayed next to the wax effigy.

James I and his son Henry

James I’s effigy and that of his son Henry Prince of Wales have been headless for several centuries.

The effigy of James I's queen was taken from a death mask.

By the time of Charles II’s death in 1685 the custom of carrying an effigy at a royal funeral had ceased. Instead a crown on a purple cushion was placed on the coffin. But a wax effigy was made to stand by his grave as he has no monument. This even has silk underwear.

Her effigy is the only seated figure.

The earliest effigy of the nobility to survive is that of Frances and she requested in her will that her effigy should be dressed in her coronation robes.

Catherine, Duchess of Buckingham and her sons

The last effigy known to have been carried at an Abbey funeral is that of Catherine, Duchess of Buckingham who died in 1743.

Her son Robert Sheffield, Marquess of Normanby is the only effigy of a child in the collection. Her other son, Edmund, 2nd Duke of Buckingham, has the only recumbent effigy and this is in its original case.

The choirmen of the Abbey augmented their salaries by showing the wax effigies to the public. They purchased the effigies of William III and Mary II in 1724. The effigy of William Pitt, Earl of Chatham, by American sculptor Patience Wright, was also acquired by them. The last effigy in the collection is of a person who is not buried at the Abbey. This is Horatio, Viscount Nelson, who died in 1805, and the choirmen purchased this as a counter attraction to his tomb in St Paul’s cathedral.

It’s very hard not to be enthusiastic working at the Abbey. If this place doesn’t make you smile I don’t know what will.